I had a bit of a busy week.
Most of the instructors at work are on contracts. There are only 8 or 9 permanent full-time positions. And there are between 35 and 40 full and part time instructors. The person that held the permanent position in our studio moved into administration and the position had been vacant for a few years. It came up for competition last month and I, and all of my colleagues in the studio, applied.
We all got interviews and had to prepare a portfolio of both our work and student work.
Here are some of the images that I submitted.
This is a piece that I did for the New Brunswick Crafts Council show "Otherworldly". I was thinking about genetically modified things, food especially,  and was wondering how far it is going to go.

What are these things? They sort of look like grapes, sort of like a bunch of cluster tomatoes but are each the size of a grapefruit. And the purple. Interesting and perhaps a bit disturbing.

In 2007, Charlotte Glencross died. She left me her loom and her husband John gifted me with her yarn stash. Charlotte was a very talented tapestry artist. As she was making her tapestries, she would wind multiple strands of coloured yarns on paper bobbins. You always wind more than you need and so over the years, she amassed quite a collection of these yarn filled bobbins. I used these bobbins to create “What Remains” over the space of ten days, weaving on average between 8-10 hours a day. This piece was my submission for the Fibre Arts Network exhibition “The Thread That Binds”, in honor of Charlotte. I learned a lot from using that what had Charlotte left behind.


The scarves sort of speak for themselves.


Sometimes I just feel like felting. So I do. Sometimes the finished product sits for a while before I decide what they will become. Sometimes they tell me. This was one of those times when the little felt balls screamed that they wanted to become blueberries. I started out with 7 but that was not enough. So I made more and it still wasn't enough. Then I had to make a bowl to put them in. And the first bowl was too small. So I made a bigger bowl which necessitated making more blueberries. So I made more...and more....and more! Eventually I decided that 37 was enough. And it was good.

Oh, I had my interview. There were 7 or 8 people who had also applied. The interview was ok but I really messed up one of the questions. We will all find out who gets the position in 4 to 6 weeks.
Posted by Jackie at 11:32 am 2 comments:

The Thing That Happened

A few weeks ago, I was asked to take part in a video that was being created to celebrate the year of Craft and the opening of the New Brunswick Crafts Council show called The Thing That Happened.
Here is the video
http://www1.bellaliant.net/communityone/video/?channelId=1fbcdcb25abc4922b966db8173a4c46f&channelListId=eba2a376b98b4e988108a4df59ad79d7&mediaId=aa12a76130fe48f6a6f60aea199fa4cb


And here is me next to my piece "Expansion" 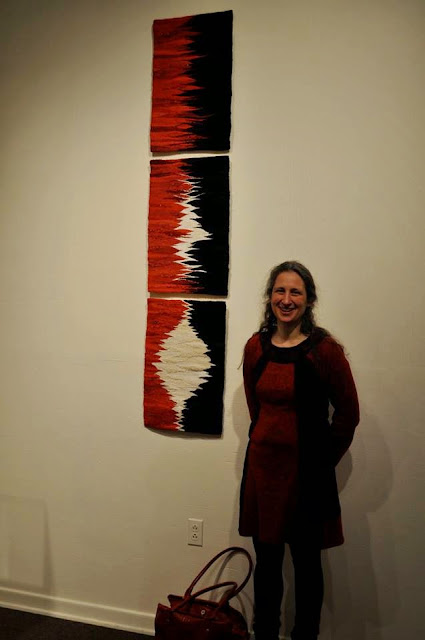 I'm glad that I sound OK during the video. I was hoping that I wouldn't come out sounding like an idiot! Matt Brown was the videographer and he was great and did a great job editing. But almost two hours of filming and adjusting to get around 5 minutes of final video. I never would have guessed.
Posted by Jackie at 8:32 pm 5 comments:

The rest of my family life